I want to tell you about my experiences diving into the web3 space for this blog.

Last year, 2021, I had the chance to work on a big NFT project that prompted me to learn ether.js and solidity. EtherJS is a library that enables frontends to interact with the Ethereum (ETH) blockchains akin to axios/fetch to communicate with those resource APIs we all know in love. Solidity is the language used to develop smart contracts deployed to the ETH mainnet.

It was a grind! I had to learn two technologies in a few days as projects in the NFT space moved fast and loud to keep the hype within the community. It was both a tiring and ecstatic experience, not gonna lie.

I realized with this experience that Web3 solely relies on the community for it to work. It gives complete autonomy to all its participants. The community drives the value of NFTs, DeFi projects, and anything else on the blockchain. And the best part? No central authority can hope ever to govern your experience or at least, it will be hard.

For example, once a contract is deployed to the mainnet, no one, even the developers, can change that contract as they are immutable. Funny thing, it also costs a lot of money to deploy one to mainnet, especially in ETH. It made me test the app with over 200 transactions in the testnet to ensure we didn't miss anything. Web3 gives this implicit trust among its users. Not to mention, anybody can read the contract as it lives in the blockchain, just like a notarized contract filed under public record in real life. Some people even mint directly to the contract provided that they understand the underlying language. Amazing.

Web2 has enabled us to be more connected than ever, blog or create content to be consumed, and reach imaginable volumes of people. But, Web2 also has groomed us into consumers.

We use the services that these tech companies offer. We tweet on Twitter, create stories on Facebook, and share every aspect of our lives on their platforms. If Web3 implements, if not enforces decentralization, Web2 is the opposite. These companies have direct influence over the governance of our usage.

Twitter can censor any tweets they want. Paypal can reject a transaction. Facebook can delete a user's profile. Heck, in all the apps I have created in my career, I have a god mode admin panel that can do whatever I want. This is not straightforward to do if not near impossible in Web3. (PS: It's easy to audit suspicious mechanisms in your contract :P. You can't hide your code behind a private repo anymore.)

Documentaries like "The Social Dilemma" in Netflix even tackled how Facebook, now named Meta, could be making an absurd reality bubble according to how you behave. (e.g., if you're racist, you'll probably see more racist posts, or if you like cats or own a cat, you'll see more cat videos in your news feed) This Facebook controversy is just one of many arguments against centralization. We use but don't own the service. Therefore, they have the right to enforce policies and control our experience.

But, the opposition has a case to make as well. Especially to this time of writing, Web3 is not yet widely adopted, and devil spawns are taking advantage of that. Scams are widespread, especially across NFT communities. It will be tough to catch these spawns since Web3 doesn't require a true identity. It's now easier to create unverified or "undoxxed" accounts to do misdeeds. Web2 has the same problem with trolls but is slightly easier to govern.

Discord bots "phish" you to minting at a malicious site, making you lose thousands of dollars if you got baited. I can steal your art, mint it, and then sell it as an NFT in a marketplace. Heck, an NFT collection owner can decide to rug and leave you for scraps, just like what happened with Doodled Dragons on Solana, where the owner decided that the charity will be his/her bank account. 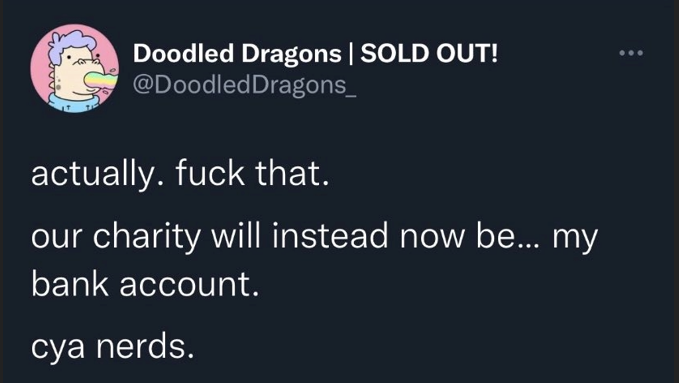 We can easily conclude UX is not on par with Web2 since it needs an informed individual to interact in the Web3 space. They need to know how blockchain networks work, how cryptocurrencies are exchanged or swapped, how gas works, how wallets connect, how even to create a wallet, etc. That's on top of how to quickly spot scams like wannabe developers sending ETH on testnet to trick people that they already paid them for an NFT swap.

It's simply the wild west. The ugly side of the coin is that not all humans are expected to behave. Not to mention, transactions are slow as the technology has yet to catch up to the speeds and innovations in the last few years that happened to Web2. And since it's decentralized, policies that protect against violence, racism, stealing, or everything wrong in the world that we want to hide desperately, won't be a thing or at least hard to be enforced in this space.

Let's not go to darker places. I believe the tech itself is still in the earlier phases of its evolution. This technology enables us to own every aspect of our transactions in this space. Unlike big companies that exploit our data, here we own it, nor do we need to give it. We drive the value of everything. Without us, this space is nothing. Everything is transparent and public.

NFTs, for example, are driving the collection market to whole new levels. People, including me, even made money out of the experience! Artists themselves receive proper royalties for their work for every sale. And, boy, am I a sucker for incredible art. Look at my Imp#8399 below! Hehe.

This idea of Web3 is nothing new. Tim Berners Lee, the inventor of WWW, coined it as the Semantic Web. Believe it or not, the concept of decentralized networks has already been happening behind the scenes with what we coined as the "Dark Web." It just so happened that this concept has finally reached a less technical public and has further improved with the advancements in edge networking and artificial intelligence.

I am looking forward to the future of this space. See you all in the metaverse!

PS: On a personal note, it's a dream come true for me to be alive in a generation that can experience Play To Earn gaming. I've always been a fan of Isekai mangas, who showed a protagonist overpowered in a game and then became rich in real life. (like in Overgeared) It's not really about being rich, although it's a nice thought. It's about finally owning the stuff I earned in a game with actual monetary value, not just virtual money without the possibility of it being forever gone as it lives in the blockchain. Even if the game dies, that item still exists as memorabilia, just like WW2 artifacts fetch value in the collector's market. Unlike if Warcraft, for example, went down. All those legendary items you grinded for, with real-life monetary value or not, will go down with it.